SINGAPORE, 17 May 2021 – Developers achieved healthy new private home sales in April 2021, with 1,262 units (excluding Executive Condos) changing hands, thanks mainly to the strong demand for homes in the Core Central Region (CCR) and Rest of Central Region (RCR). The number of new homes sold in April 2021 was about 2.6% lower than the 1,296 units transacted in the previous month. When compared to April 2020 - when the Circuit Breaker was implemented – new home sales last month soared by more than four times from the 277 units transacted a year ago.

In particular, two new launches – Irwell Hill Residences and One-North Eden – spurred sales in April, selling 315 and 141 units respectively. The two projects collectively accounting for about 36% of the monthly total. April’s sales were led by the RCR which sold a total of 507 units, driven by One-North Eden and Normanton Park. This was followed by the CCR where 444 new homes were transacted, with Irwell Hill Residences making up majority of the sales. Meanwhile, the Outside Central Region (OCR) shifted 311 new units as home buyers continued to dip into previously launched projects amid limited new launches in this sub-market.

In the EC segment, developers sold 80 new units in April 2021 – up slightly from the 77 new ECs transacted in the previous month. Parc Central Residences EC, which was launched in January this year was the top selling EC project during the month, moving 37 units at a median price of $1,169 psf.

In terms of units launched, developers placed 1,038 new private homes (ex. ECs) on the market in April – higher than the 959 units (ex. ECs) launched in the previous month.

Ismail Gafoor, CEO of PropNex:
“Once again, we see fresh project launches lifting the new home sales in April 2021. The robust demand for new homes in recent months reflected buyers’ growing confidence in the property market, amid the brighter economic outlook and improved sentiment. In addition, developers are also pricing units sensitively; the median transacted absolute price quantum for non-landed new private homes was about $1.6 million in April – similar to March – and still within the pricing sweet-spot that is generally palatable to many buyers.

Amid the strong sales, we observe that many buyers are by-and-large still quantum-sensitive and discerning about the property that they are buying. For instance, buyers are particularly drawn to projects with attractive attributes and a strong story - be it being situated in an area seeing ongoing transformation or a place with exciting future development plans or perhaps in a convenient and accessible location. Essentially, they are buying into the growth and transformation story of the various precincts in Singapore – which could potentially help to support capital values in the future.

We expect the CCR and RCR to continue to prop up sales volume in the months to come given the upcoming launches in these segments and limited mass market launches in the OCR. For the whole of 2021, we are expecting new private home sales (ex. ECs) to likely cross 10,000 units, barring any unforeseen events and new cooling measures.”

Wong Siew Ying, Head of Research and Content, PropNex:
“Based on the sales caveats lodged, Singaporeans remained the main driver of new homes sales in April 2021, accounting for about 81% of the overall non-landed new private homes transactions – marginally down from 82% in March 2021. Meanwhile, the proportion of non-landed new private homes bought by foreigners inched up from 4% in March to 5% in April. Home sales should continue to find support from Singapore investors and buyers, including HDB upgraders, as the strength of recovery in the HDB resale market may encourage some owners to take the opportunity to trade their flat for a private property.” 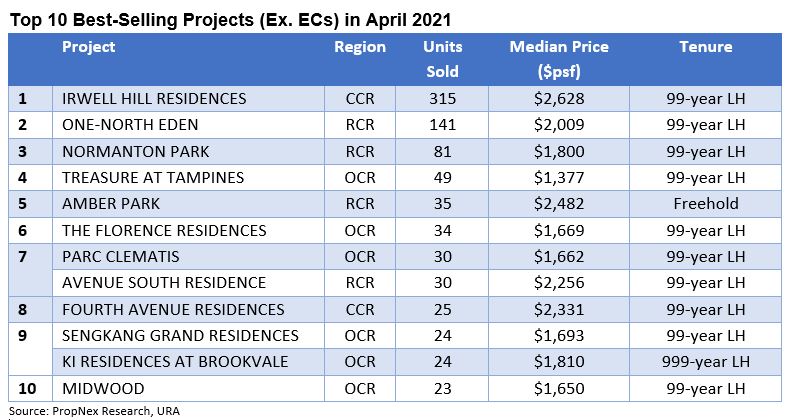