3Q 2017 rebounded strongly with 0.7% price growth and robust transaction volumes
URA’s Q3 2017 data shows that prices of private homes in Singapore rose by 0.7 per cent quarter-on-quarter (Q-o-Q), ending the price decline of 15 quarters since Q4 2013. The 0.2 per cent growth overall in the first three quarters of 2017 reverses the overall negative growth since 2014. CEO PropNex Realty, Mr Ismail Gafoor commented, “With the lowest price decline experienced in the previous quarter, this positive growth of 0.7 per cent in the 3rd quarter did not come as a surprise for many. We believe that the strong broad-based demand from all segments is set to continue.”
With the positive sentiment in both primary and secondary markets and a sense of greater urgency by buyers and investors, Mr Ismail predicts that overall prices in 2017 might possibly increase to 1 per cent as compared to a decline -3.1 per cent in 2016.

“In addition, resale segment took the lead, forming 59 per cent (3,949 units) of the total number of transactions in 3Q17 as buyers continue to be attracted by the resale prices which are generally 10 to 15 per cent cheaper than new launches.” 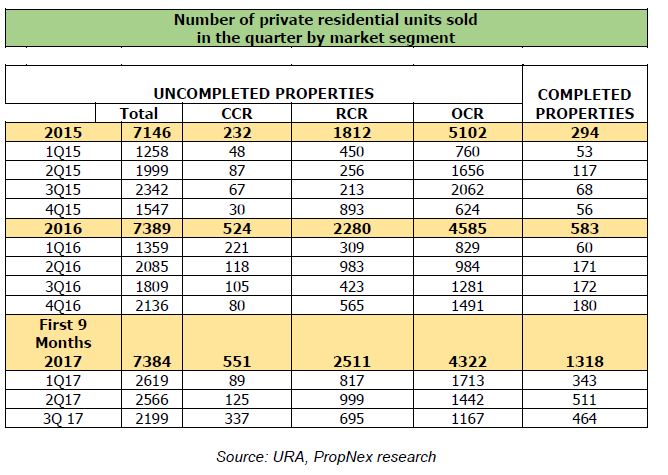 In 3Q 2017, CCR region sold the most number of uncompleted properties (337 units), in the last 10 quarters, since 2015. Prices in CCR rose by 0.1 per cent after falling for the past two quarters, signifying greater confidence and the trend of overall growth. Mr Ismail highlighted, “We can expect many home investors and foreign buyers entering the attractive pricing for luxury properties in CCR today with the good demand for this segment spilling over to next year.”

Outlook for private properties in 2017 Despite having lesser launches in the second half of the year, Mr Ismail is confident that the total volume of transactions will be in the range of 23,000 to 24,000 units by end of 2017. This will set the record for number of transactions in the last FOUR years since the cooling measures were introduced in 2013. As for the price index, based on the performance of the first three quarters and the positive growth of 0.7 per cent this quarter, Mr Ismail predicts that that overall prices in 2017 might possibly increase to 1 per cent as compared to a decline -3.1 per cent in 2016.

HDB resale prices dipped 0.7 per cent in Q3 2017, the highest decline since Q1 2015 (-1 per cent). CEO Mr Ismail commented, “The current low price points will attract more to consider the resale segment, especially for young buyers and upgraders.” The HDB resale segment also witnessed 5808 transactions this quarter, 3.2 per cent decrease from previous quarter’s transaction. Mr Ismail believes that the 16,339 transactions recorded for the first nine months, will pave the way for volume to exceed 22,000 units by end of the year. A total of 20,813 units were transacted in 2016.

“Due to the increasing supply of HDB resale flats in the market as many owners are opting to upgrade to Executive Condominiums (ECs) and private properties, prices are expected to fall by about -1.5 to -2.0 per cent by end of 2017.” Mr Ismail added. 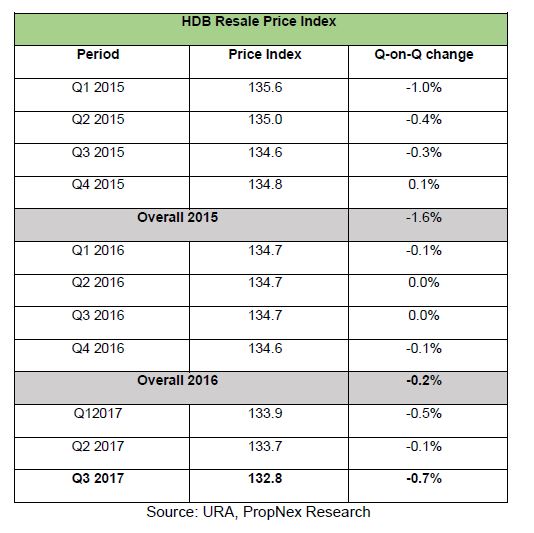