Price Increase of 0.5 Per Cent Ends Trend Of Price Decline Since 2013

Price increase of 0.5 per cent ends trend of price decline since 2013
URA’s Q3 2017 Flash Estimates data shows that prices of private homes in Singapore rose by 0.5 per cent quarter-onquarter (Q-o-Q), ending the price decline of 15 quarters since Q4 2013. CEO PropNex Realty, Mr Ismail Gafoor commented, “With the lowest price decline experienced in the previous quarter, this positive growth of 0.5 per cent in the 3rd quarter did not come as a surprise for many. We believe that the strong broad based demand from all segments is set to continue.” Based on the positive sentiment in both primary and secondary markets in Singapore Property and a sense of greater urgency by buyers and investors, Mr Ismail predicts that overall prices in 2017 might possibly increase to 1 per cent as compared to a decline -3.1 per cent in 2016. 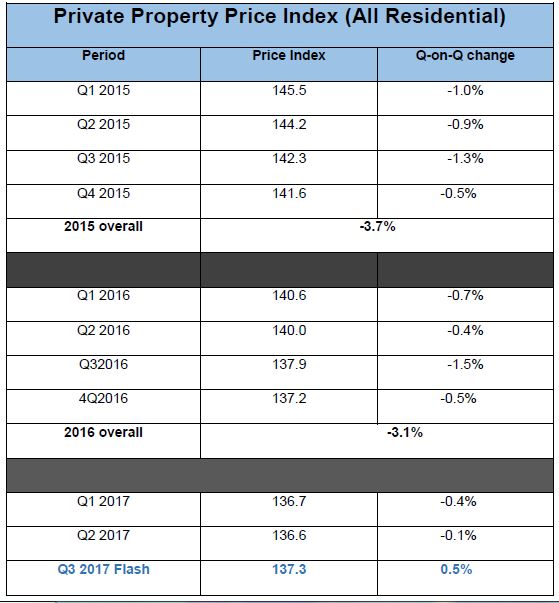 Prices in Outside Central Region experienced highest growth since 4Q 2013

Prices of properties in the OCR rose by 0.7 per cent, the highest growth since prices started to fall in 4Q 2013. Mr Ismail added, “With the strong land bids by developers, we can expect this region to take the lead against other segments for the rest of 2017 and 2018 as well.” In the CCR region, prices rose again by 0.2 per cent after falling for the past two quarters, signifying the trend of overall growth. Mr Ismail highlighted, “Recognising that prices might increase even higher in the upcoming quarters, many home investors and foreign buyers will choose to enter the market to take advantage of the attractive pricing for luxury properties in CCR today. We can expect good demand for this segment spilling over to next year.” 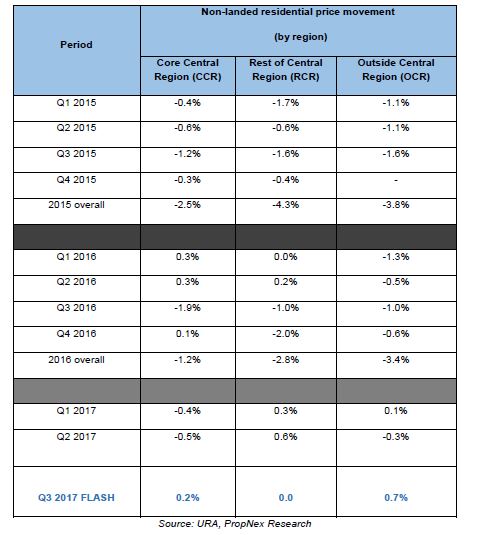 According to the flash estimates this quarter, HDB resale prices dipped 0.6 per cent, being the highest decline since Q2 2015 (- 0.4 per cent) continuing the price decline for the whole year. Ever since the huge price decline of 6 per cent in the year 2014, the last three years (2015, 2016 and 2017) experienced marginal price movements all which points towards market consolidation. In addition, the rather muted movement of public housing prices may be attributed to the continual ample supply of Build to Order (BTO) flats by the government. Mr Ismail predicts that 2017 will probably witness an overall price movement of about -1 to -1.5 per cent with prices of public housing will likely experience a positive upturn in the second half of 2018. 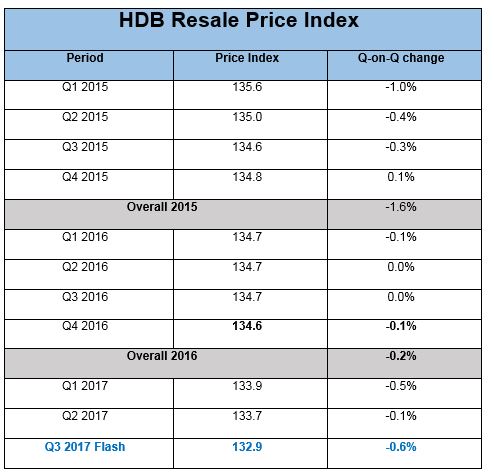