The figures released for today depicted a total of 1,581 units (including ECs) and 1241 units (excluding ECs) transacted in August 2017. Even though there is only one new launch during the month, the private new homes segment did relatively well with 1,241 total units sold (excluding EC) which is higher than in the months of May, June and July. The total units sold (excluding ECs) in the first 8 months of 2017 has also surpassed the volume of transaction of the whole of 2016 illustrating the positive momentum and greater activities in the segment.

CEO PropNex Realty, Mr Ismail Gafoor believes that with the existing positive trend and the buzz in the new private homes segment in the next few months, the total transactions may cross the 16,000 mark by end of 2017, with 12,000 private properties and 4,000 ECs snapped by buyers. “Buyers are more prepared to pick up existing projects that are rightly priced, fearing that prices might increase by more than 10 per cent come next year, with the recent aggressive land bids from recent land sales.”

Le Quest, Mixed Development in Bukit Batok led sales in August
A total of 286 units of Le Quest, a mixed development at Bukit Batok were sold in the month of August, making it the top-seller for the private residential segment. Mr Ismail commented, “We have seen greater demand for existing projects, with healthy activities and pick-up rates across the island. This is reflected by August’s top five performance, four of which are existing projects which sold for than 50 units each.” 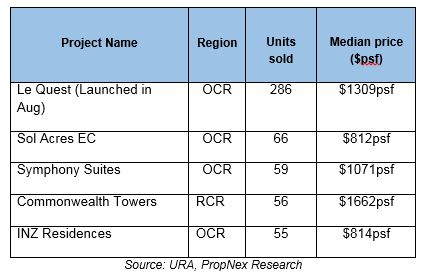 OCR properties continue to be sought after
Properties in the Outside Central Region (OCR) continues to be the most sought after, accounting for 61.8 per cent (767 units) of new private home sales (excluding ECs), while Rest of Central (RCR) and Core Central Region (CCR) accounted for 26.9 per cent (334 units) and 11 per cent (140 units) respectively.