URA’s Q1 2017 data shows that prices of private homes in Singapore fell 0.4 per cent quarter-on-quarter (Q-o-Q) which is amongst the lowest in the past 14 quarters, similar to Q2 2016. The private property market is also moving towards a positive direction with the highest number of transactions concluded in the last 15 quarters at 5,202 transactions this quarter.

CEO PropNex Realty, Mr Ismail Gafoor highlighted, “This positive sentiment and stabilizing prices can be attributed to the announcement of the adjustments in cooling measures and the aggressive land bids by developers which reflect the clear indication of the demand and the stable prices expected in the future launches with the higher land bid prices attained.”

Mr Ismail also commented, “Buyers and investors who were at the sideline monitoring the market since the cooling measures were introduced have demonstrated greater sense of urgency in picking up units in recent launches, as they are concerned with prices increasing in the coming quarters.” 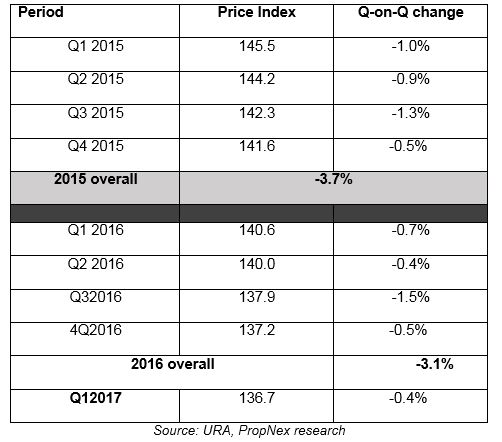 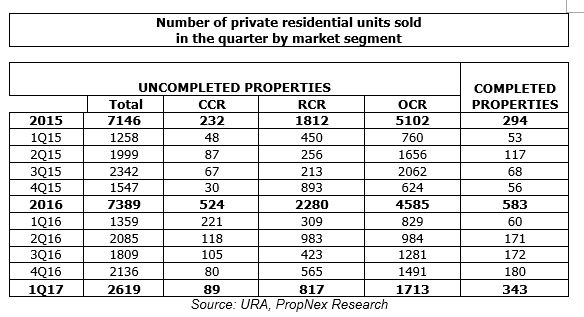 Prices of luxury properties in the CCR fell by 0.4 per cent, and is expected to continue to soften and lead in the overall price drop for 2017.RCR prices saw a positive growth of 0.3 per cent whilst OCR prices registered a 0.1% increase after registering a 0.6% decline in the previous quarter.

Mr Ismail highlighted, “We expect prices in Core Central Region to drop by 2 to 3 per cent in year 2017. As for OCR, with the recent strong land bid by developers we can expect the region to outperform and lead the growth for the private property segment for the rest of 2017.” 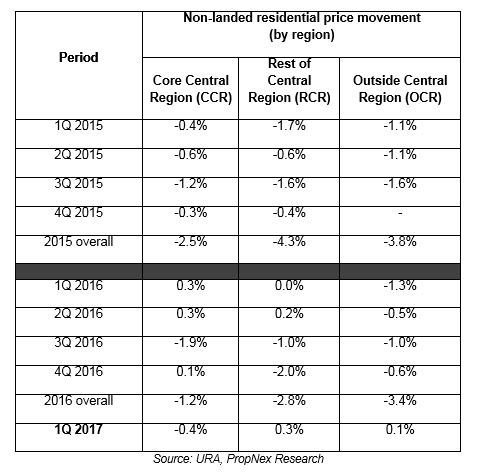 Mr Ismail believes this positive sentiment in the first quarter is expected to carry through for the rest of the year as prices are expected to consolidate with positive growth of 1 to 2 per cent in 2017 as more buyers and investors are expected to enter the market. He also expects volume of transaction to cross the 19,000 mark in 2017.

Public home expected to grow positively in the second half 2017

HDB resale prices dipped 0.5 per cent in Q1 2017. Even though this price drop is higher than the overall drop of 0.2% for the whole of 2016, CEO Mr Ismail believe that this is a marginal drop as the first quarter of the year traditionally witness lesser activities in the market, with lower number of transactions due to the CNY holidays and February being a shorter month.

“With the highest number of transaction at 4,530 in comparison quarter-on-quarter since 2013, we are confident that HDB resale transactions in 2017 will likely to hit the 22,000 mark due to the current stable environment in terms of pricing and the non-existence of COV for more than 80% of transactions in resale market.” Mr Ismail highlighted.

He also added “2017 will witness a positive growth in the second half of the year with an overall stable price movement of about -1 to +1 per cent. ” 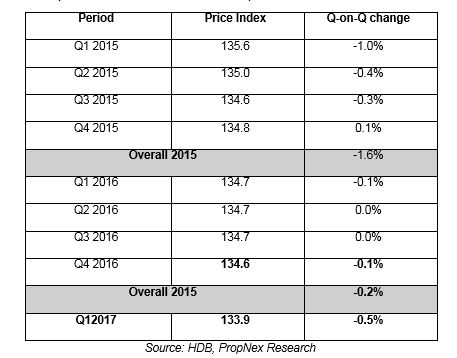