URA’s Q4 2016 flash estimates show that prices of private homes in Singapore fell 0.4 per cent quarter-on-quarter (QoQ), with an overall 2016 price fall of 3.0%. The overall price decline in 2016 reflects the current languid market sentiment and the sustained impact of the cooling measures. For the 13th straight quarters, prices of private homes have dipped and 2016 is the lowest fall in prices since 2014. 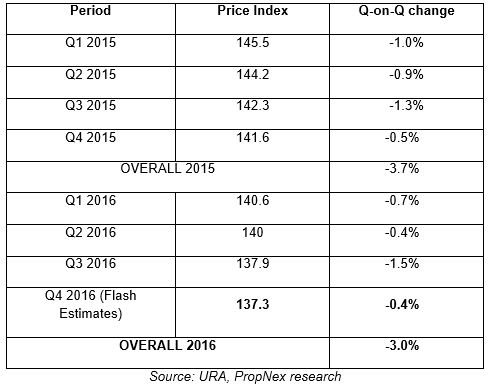 “Private property prices have reached a point of market stabilization and a closer look at the different regions’ performance (table in the next page), it was noted that the price points were becoming attractive enough for investors especially in the Core Central Regions (CCR). Prices in the CCR has attained 0.0% growth in 4Q16, and the overall Private Property Price Index 2016 with the lowest drop in the last 3 years, thus signaling greater market confidence of more buyers entering the market.”

While reasonably-priced homes with desirable product and location attributes will continue to find favour with home buyers, the private residential market looks set to continue its price decline, but with possible pick up in demand due to various factors — with the TDSR and ABSD working in tandem to rein in exuberant home buying. Buyers are now more discerning and are entering to invest in private homes. 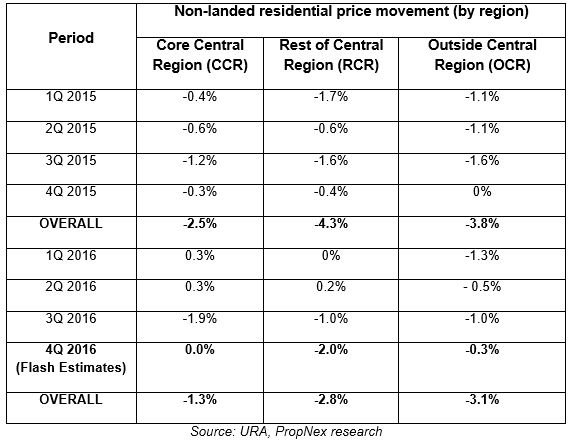 “The current price points attracted home investors’ interest in 2016 and we predict that the volume of transaction in the private residential segment to close the year at 16,000 a 13% increase from 2015. Despite the uncertain economic outlook and impending interest rates hikes, we are expecting a price moderation in 2017 with possible negative growth of not more than 3 per cent”, remarked Mr Ismail Gafoor, CEO of PropNex Realty.

HDB resale prices continued to dip 0.1 per cent in Q4 2016, this price drop comes after two quarters to zero price growths this year. However, overall prices still fell 0.2 per cent in 2016. 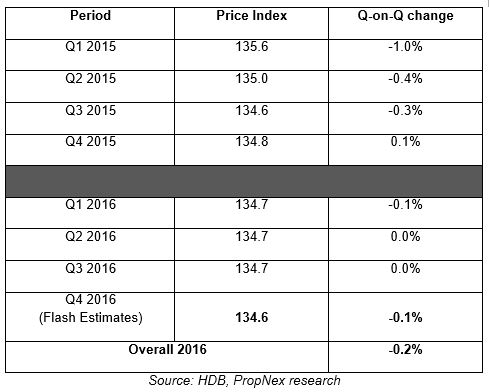 Resale prices expected to be flat in 2017

Mr Ismail Gafoor, CEO of PropNex Realty said, “The potent combination of the measures has been effective at slowing down the price growth of HDB resale prices. Having experienced double digit price growth in HDB resale flats in 2010 and 2011, HDB resale market had its biggest correction in 2014 at -6.2% and tapered to smaller corrections of -1.6% in 2015, HDB prices are going through a period of consolidation with marginal price movements.

Though we expect resale prices to be flat in 2016, it may have already reached a bottoming-out level in Q4 2016. HDB resale activities however are expected to cross 20,000, recording the highest volume of resale transactions since 2012. Find more updated HDB for sale listings at PropNex.

We predict that 2017 HDB resale volume to be 21,000 as the current price points will entice more buyers to enter the market as it is attractive enough for young couples and upgraders – which could also be partly attributed to the non-existence of COV across the board,” says Mr Ismail.

“HDB resale prices are expected to continue being flat in the first half of 2017 and take a positive turn in the second half of the year ending with a positive +1 to 2% price growth,” predicted by Mr Ismail.